on... Training Logs (the long version that's more about my injury)

I really wish that I kept a training diary. Often, I am encouraged to keep a record of my training, together with details of how I felt, and any physical problems or pain experienced before, during, or after the exercise session (Note: exercise does not need to be running!)
.
There are a few different ways to keep tabs on what you’ve done, where you’ve been and how you felt. These range from high-tech diaries where you can plan out your schedule in advance, then update with the actual activities that you performed, to custom spreadsheets, GPS run recording tools or good old fashioned pen and paper.

I’ve recently been suffering a bit of downtime, following an injury that was diagnosed as a broken fibula (leg), just above the ankle joint. One of the issues that I have had is working out exactly when the injury happened. This would have been far easier if I was using a training diary as everything would have been recorded.

The “pain” that I suffered in my ankle first made itself visible on Sunday 6th December, following the final rehearsal at NoFitState circus for their “Journeys” show on the following weekend. I felt a bit of pain, like a mild twisted ankle. I also had a pain in my back and a cut following a little slip-up which caused me to involuntarily bounce a hoop off the bridge of my nose.

I struggled at work the following day - my back hurt, ankle was a bit swollen but I also had some breathing issues - felt like I was coming down with a chest infection / cold. Desperate to be able to run the Pudding Race the following Sunday, I booked a sports massage and also called in to see my GP. My doctor examined my chest and pronounced me OK, she also checked my ankle and decided that it was probably just “soft tissue damage”, the major pain being if prodded just above the ankle bone. I visited the physio (not my normal one), who sorted my back and done some work on my ankle, also believing it to be OK for running on the Sunday, strapping it up with Kinseology tape. We discussed the pain above the ankle, but again, dismissed it as “soft tissue”.

All was fine for a few days - I rested, there wasn’t a lot of swelling, while dealing with the aftermath of having “sold” my places for the Pudding Race at the onset of the injury, then needing the places back (I was to run with two of my sons). I was trying to ensure that no-one was let down and managed to find two places so that no-one was disappointed, just needed to ensure that I was ready myself.

Thursday night, I thought I would be good for the Bodypump class at the gym (yes, I know). On the whole, I was, although there was a severe pain just above my ankle while doing squats with a bar on my shoulders. I completed the class then done a final rehearsal for Saturday’s show. This hurt, a lot. I decided that it was probably the tape holding my foot, so I removed it when I got home. Friday was painful - very painful to walk anywhere. This made me feel a bit upset, and I started taking Ibuprofen to try to reduce the swelling. Saturday was the day of the performance, and a final tester for Sunday’s pudding race. It was still pretty painful to walk, and I should have guessed that my ankle was still bad based on the pain during the warm-up. Performance went OK - the rest of the Troupe were just brilliant, I was more focussed on not hurting too much and not injuring any of the audience with a loose hoop. Our routine was to end with a Conga, actively taking the audience from one end of the building to the other. Boy, I never knew that a Conga could be so painful! I hopped from side to side, wincing as I went, sat to watch the next act, then went home. No Pudding Race for me. In the end, having sourced two race tickets for others (not making any money), I gave mine away at the last minute.

I’m glad that I still took my boys down to run over the sand dunes, looked absolutely amazing - I can see how it sells out in 20 minutes. The only issue that I have is that it’s a bit more than half a mile to walk from the car park to the start. I hobbled down, hung around for an hour or so, then hobbled back with my little girl finding each and every puddle on the way (I blame Peppa Pig). That didn’t do my ankle any good. Had a week of ankle swelling up and down, painful walking but no painkillers (my normal policy and sense returned - let the swelling do the fixing).

A week later, I felt a bit torn on whether to go and have it checked or not - my wife thought it’d be OK, a friend had been pushing me all week to get it xray-ed. Saturday night, almost OK, Sunday morning, hurt a lot more following extended “congress” the previous night (try writing that down in your Training Log!). I got up, went to the Minor Injuries unit at Ystrad Mynach only to be XRAY’d and told that I had fractured my Fibula. The nurse put me in a Air Cast boot, seeing no point in plaster, but (interestingly), she said that the fracture was older than two weeks.

Thinking on it, I went to the Mary Bijou Cabaret on the Friday before the “initial Sunday”. We avoided any chance of “audience participation” by sitting second row up, directly in line with the Stage, central to the pole actually, always a good spot. When getting down for drinks during the interval, I stepped over the seats in front instead of walking past the others on our row - perhaps that was it? But then, we danced for the best part of an hour after the show (including being invited to dance on the stage), and no pain (no alcohol either). This theory was discounted by the fact that I done some DIY around the house the following day with no pain.

After a week of hobbling around in the Boot (lovely noise), I was thinking again. During early November, I was working at a desk with my legs crossed. I got up for lunch, uncrossed my legs, but the blood had drained out of my foot so when I stood up, it rolled and the full weight of my body went through it. The pain was incredible for a few minutes, then settled down fairly quickly, with no swelling. At the time, I thought it was rather ironic since the same afternoon, I purchased a pair of new Cross Country trainers (Salomon FellCross, very nice). Since then, I’d run parkrun twice with these trainers, as well as the GCLC at Pontllanfraith. This was a new possibility - the only time I recall experiencing major pain, but surely I couldn’t have been running with a broken bone? The “incident” would certainly have made it into my Training Log though. This thought was confirmed when I watched the following (animated) video of a fibula break (about 15 seconds in):
https://www.youtube.com/watch?v=I-iEOoM1N-w 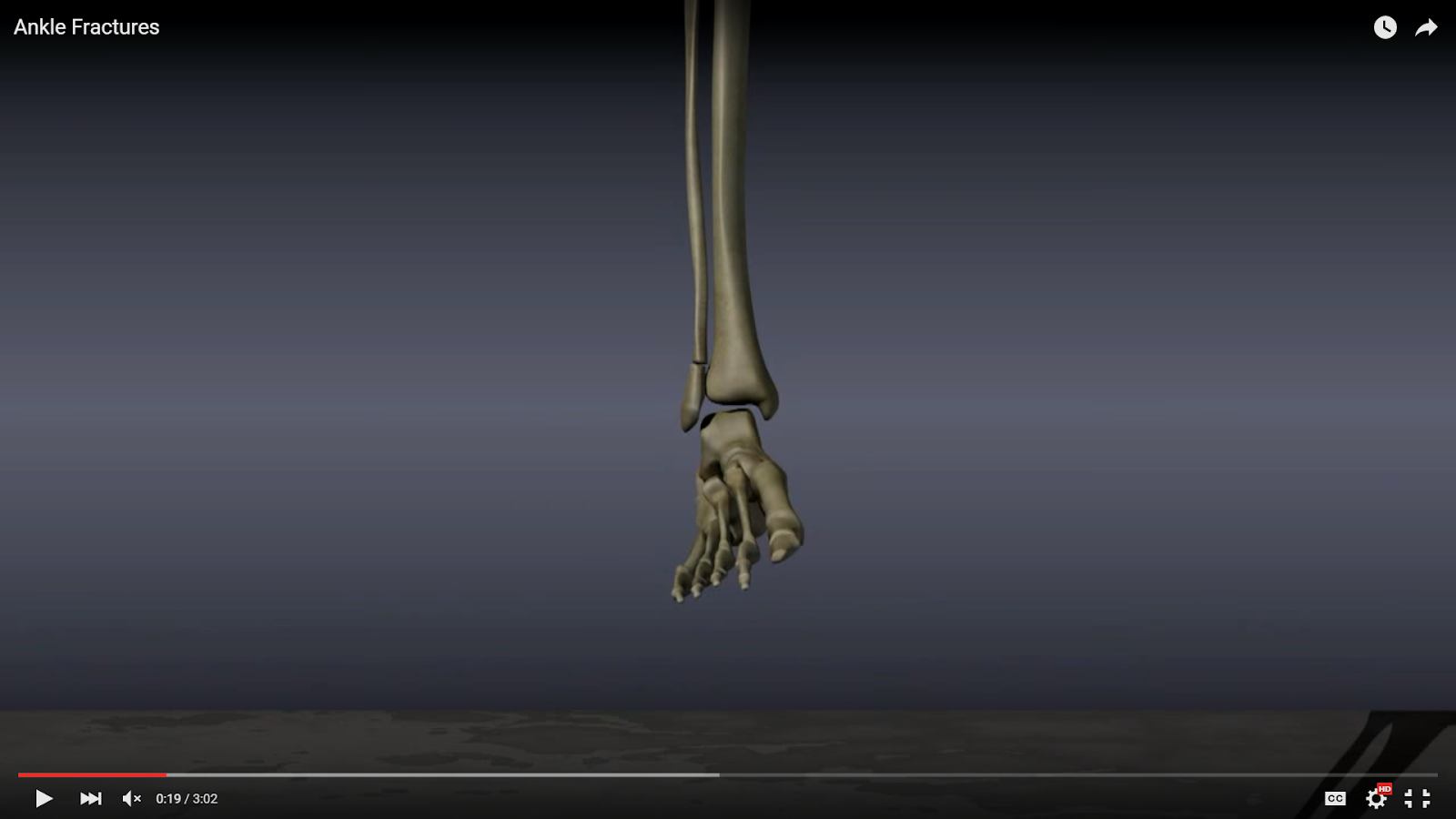 I had my first visit to the Fractures clinic on Thursday. After a few questions, and a play of the “does this hurt?” game where the Consultant twists the foot and ankle into different positions in an attempt to identify pain, I was signed off. The Air Cast boot was certainly not required, and the small ridge on my leg was evidence of the bone healing nicely. I had taken a list of questions, but the main one concerned the origin of the break. The Consultant confirmed that the incident from November was most likely the cause of the break - the bone probably broke but remained stable. I de-stabilised it during early December, which was the source of the pain and the swelling. I pointed out that I had run Cross Country the week after and the response was “you should give it six weeks before you do that again”. Weeks, not Months.

I questioned the possibility of brittle bone, but he wasn’t convinced - suggesting that I speak with my GP to order a scan. It’s more common in hips and wrists and normally requires two breaks before they send you for tests (thanks!). I also asked about over-compensation injuries (which I learned about when I needed to have my second knee operation), so he sent me for a further XRay of the broken leg, together with the other one. He reported back that all was fine, the gap between the bones on each leg is identical and the healing process is doing well.

As for exercise, I will be taking it easy for a bit, and will return to running gradually. I am allowed to use an exercise cycle, walk on the treadmill and do ankle mobilisation exercises. Physio appointments are booked and as for running… suggestion was to wait a week or two then run half a mile to see how I feel.

I hope that this might help anyone else finding themselves in such a position. By keeping a log of training, exercise and “life events”, it can be a lot easier to identify where problems come from. I will write a separate version with more about Training Logs, but I’m a bit tired now. Something that really suprised me was that the less exercise I performed, the more I wanted to sleep.

Oh, and don’t cross your legs when sat at a desk. I’d heard this for years based on it being bad for your circulation. Had people said “because you might stand up and break your leg” then I might have listened.